“Argue for your limitations, and sure enough they’re yours.” ~ Richard Bach.

It’s normal and quite easy to delay stepping into our goals and dreams. After all, it’s quite comfy over here. It’s familiar territory and I don’t have to think much. And I absolutely will take on this new goal/dream of mine once I have…

Is it the truth? Do you really need to wait any longer?

“When you stand in your truth, the universe moves to support you.” ~ Lynda Austin

A friend of mine followed her dream and became a life coach despite having no money. She paid the registration fee entirely on credit. Not long after registering, she received a letter in the mail from her financial institution. It said she had more money than she thought she had, almost to the exact dollar she spent on the course.

“I try to believe like I believed when I was five…when your heart tells you everything you need to know.” ~ Lucy Liu 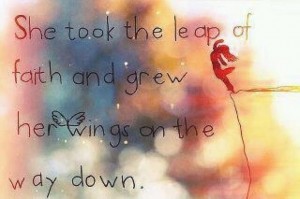 The child in you wants to jump. She wants you to step forward because she believes anything is possible.

Where is it time to step forward? Let the winds carry you.

Have a Playful Monday!

Vince Gowmon is a spiritual teacher, healer, author, poet and musician. He is known internationally for his writing and online healing and activation ceremonies in which he works with Ascended Masters, Spirit Animals, Crystals, Stars and more. To stay in touch, please subscribe to his free e-newsletter. You can also follow him on Facebook, Instagram, Twitter and his Youtube channel.