There is a great emphasis put on letting love in. “Open your heart” says the self-help teacher. “Give yourself to love” sings the romantic poet. They make it sound so easy!

For this wounded one (who makes up many, if not most, Euro-westerners), asserting boundaries may be the necessary first step. Before letting love in, the old truncated impulse to protect must be exercised.

For my clients this is sometimes accomplished by giving them the experience of pushing out. Their hand, foot, or elbow pressed against my palm, very, very slowly, they push me as I offer resistance. Inch by inch, they push me away. They do what their fight response instinctually needed and wanted to do years before when scared, overpowered, frozen. When abused.

The arm, leg, the entire body, trembles as it gets to fulfill the old survival instinct still lingering, sometimes decades later, in the physiology. Old fears and shame surface, the fears and shame that kept the person from asserting their boundaries in the first place during the traumatic incident. The contracted fearful state co-arises with the empowered choice to push away. The enacted survival response “pulls” the trapped shame and self-blame, often felt as nausea or disgust, out from its hidden shadowy doldrums. I’m worthless, I’m horrible, It’s all my fault, I’m bad, I’m wrong—belief derivatives of the original trauma—move from unconscious to conscious in the psychophysiology.

Life awakens in the body. Primal energy is freed, filling the system. The physiology completes the circuit—the survival response that was truncated decades earlier.

With a brave push my client usually uncovers their suppressed voice. Having been sealed shut in order to survive, it now has its long-awaited say—scream! The truncated impulse to shout No, Get lost, Leave me alone, Fuck you, Stop, or Get off of me bravely trembles upwards from the gut, making its way into their throat, onto the tip of their tongue and out.

With this, the voice is liberated, free to say No in all the other ways my clients have been avoiding. With their boss, friend, partner, husband, wife, no longer are they a pushover for they have learned to push away. It becomes easier to turn down working late, the imbalance of household duties, helping others when all they want to do is go home and have a bath.

When young, taking space through survival movements and a clear, firm voice would have made things worse during the traumatic incident(s). It would have been terrifying, to say the least, to push the perpetrator away or tell him/her Stop. They would have learned that in order to survive, particularly during physical / sexual abuse, they had to put the perpetrator’s needs ahead of their own. Deference, not assertively taking space, would get them through the overwhelming situation. Over time, that pattern would have continued—pleasing or accommodating others; putting other people’s needs ahead of their own.

Now, however, with courage and confidence, my clients, bit-by-bit, allow themselves to be seen and heard; to say a clear No while saying Yes to themselves—their needs and desires. More than ever, they stand tall in their truth and boldly put themselves first, even if it means making others uncomfortable. The survival adaptation to please and play small fades as trauma heals.

Finding Yes through No

Over time, through boundary exercises, nervous system regulation, and other healing work, they find it easier to bring someone into their heart. Love is set free into the body from the shackles of fear, a love that comes from loving oneself. And as it moves more freely within, the fear of love is projected less onto the other. Men, women, the others are no longer a threat. A secure attachment, bond, is possible.

The body opens more to Yes because it’s learned to say No. The fears of yesterday are replaced by the love of today. 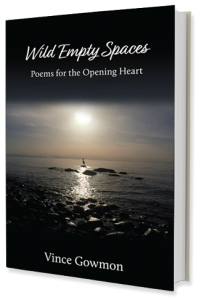 For more of Vince’s writing, subscribe to his free e-newsletter.

Vince Gowmon is a spiritual teacher, healer, author, poet and musician. He is known internationally for his writing, and for his online healing ceremonies and private work which draws upon the mystery and power of Starlight. To stay in touch, please subscribe to his free e-newsletter; or you can also follow him on Facebook, Instagram, Twitter and his Youtube channel.